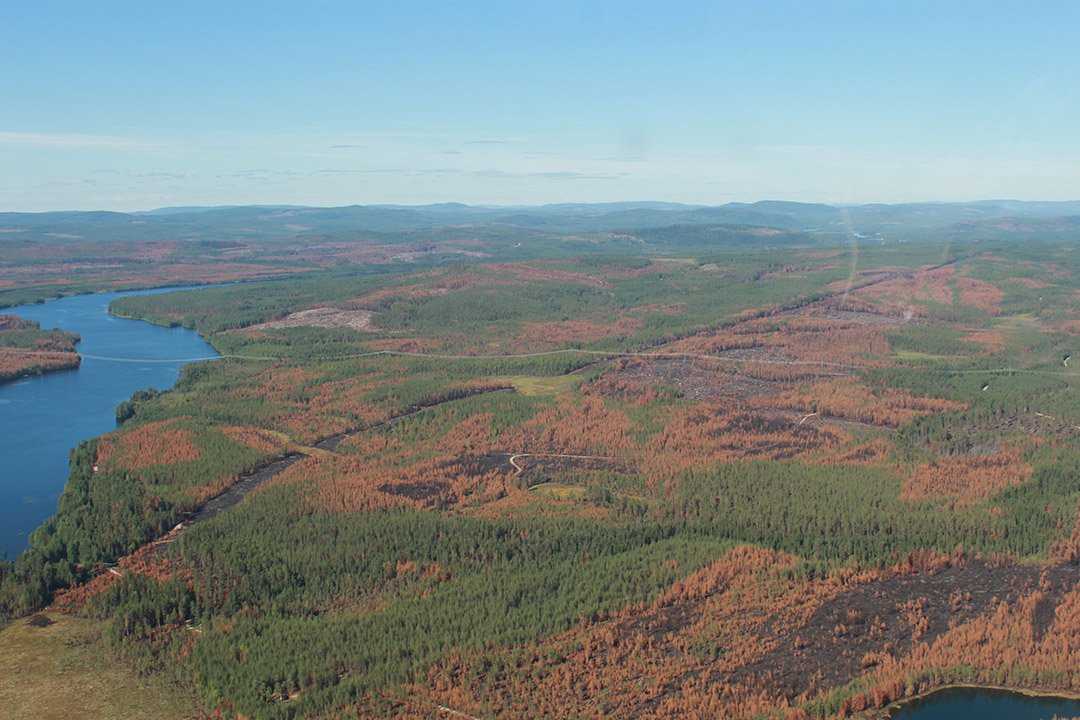 Aerial view of forest areas damaged by the fires, August 2018.

How to translate our web

Please click the globe icon at the top, to activate Google Translate and choose language to use on our web.

Be careful in the fire damaged area

From June 24 2019 you can visit the forest fire area, but please be careful and attentive moving around. You can travel through the area on roads 84 and 296.

Watch out for falling trees
Trees may look green and healthy but have a damaged root system. They fall quickly and silently, especially during wind, rainfall or heavy snow.

In areas that are or will be nature reserves, nature will be left to develop freely, and other restrictions may apply. You find more information at the County Administrative Board of Gävleborg.

The forest fires in Ljusdal Municipality in 2018

On July 16th the local rescue services were alerted to a fire in the area of Enskogen. Due to the extreme and longlasting drought in forests and fields and windy weather, the fires spread quickly. In total, five different fires were raging in the area during July, but the two smallest fires at Rullbo and Tovåsen were soon extinguished.

Both national and international rescue teams were involved in fighting the forest fires. Four weeks after the fires started, on August 9th, the fires were put out and the rescue efforts were terminated.

The affected forest areas have been declared closed to the general public, for safety reasons. The Municipality of Ljusdal and The County Administrative Board in Gävleborg have established a Coordination Office to support landowners and others who are affected by the fires.

Facts about the fires

Information on national emergencies or crises in Sweden

For general information in English about any national emergencies or crises, please visit the web site Radio Sweden. You can also visit the other links listed in the right column of this page or dial 113 13 (national crisis information services 24 hours a day).

Are you or anyone else in an emergency situation?

Is life, environment or property in danger? Please call 112 if you or somebody in your vicinity collapses or has a serious accident, or if there is an urgent need for ambulance, fire services or police services.

Information about the fires

Länsstyrelsen Gävleborg (The County Administrative Board of Gävleborg)